“Stand together, learn from each other, you are not alone!”, Manuals for fighting for the right to housing and the right to work 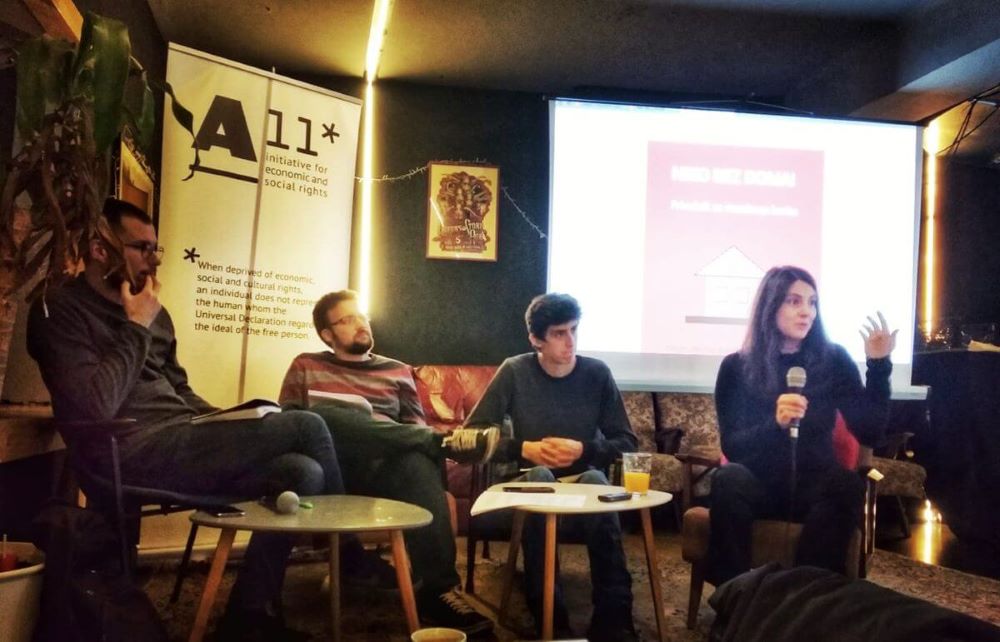 Posted at 11:30h in News by a11initiative 0 Comments
Share

The manuals summarise the activist knowledge generated in different contexts and actions fighting for the right to housing and the right to work.

Both the manuals consist of three parts: the first part explains the specific causes of the housing issues (“Nobody without a home!”), i.e., labour related issues (“Who is working?”) in substandard settlements; the second part describes “the tactics and methods for self-organisation for the fight for adequate housing”; while the third part proposes alternative solutions.

One part of the manual is based on interviews with the disadvantaged population conducted as part of the outreach work, while the other part is based on the experiences of the local and international organisations.

Aleksa Petkovic spoke about the different situations faced by the Joint Action for Roof over Your Head during the two years since their establishment:

“The Trudbenik settlement case is a good example. The defence of that settlement took place before the Roof over Your Head organisation was established. The people in the Trudbenik settlement have a common history, they had been through a long strike together, and that experience has brought them closer. They are no strangers to organising meetings to discuss current events and problems”.

Petkovic mentioned the Stop the Destruction of Human Lives protest, which also aimed to bring together people and communities at risk on various grounds:

“Let’s try to continue this together, to act together and create a common front. We can help these people in the short term, but the question remains what will happen in a few months from now.“

The manuals are intended primarily for the disadvantaged communities, and they have been prepared with the intention of contributing to the establishment of the communities themselves and their solidarity networking. “We would like to link the community actions that are yet to come, those that are ongoing and those that have ended”, Petkovic stated.

“The fight has shifted from the field of work to the field of social reproduction – as it can be seen in the fights for housing, for clean water, etc.“, Vilenica said.

There will be more and more such fights, and it would be good to not have to start from scratch every time. In that sense, these manuals could serve as one of the contributions to the resistance, certainly an imperfect one, and by no means the only one.

“This is a slow process and I do not know if we are doing this the right way. We are learning as we go“, Petkovic said.

Vilenica emphasised that she had no intention or ambition to present any of the authors or organisations as authorities on this issue. ”Unfortunately, the form of the manuals itself limits any such intent, as the manuals developed under projects are not, as a rule, a manifestation of a grassroot movement, but of a top-down approach”. As Vilenica explains:

“I think we are all in trouble. My motivation to fight for this issue is not to ‘help’ – I want this society to change fundamentally, for myself, for my child, and for all people. This is a small step in that direction. I do not know if we have succeeded in giving our contribution, but that was our intention“.

According to the speakers, the alternatives that have been presented were developed for specific contexts, and they cannot be simply rolled out and used as a recipe. For example, community-based housing planning is a practice that does not exist in our country, and cooperatives are difficult to achieve. However, those solutions that are not practically applicable may serve as inspiration. Primarily:

“We have to get used again to the idea that private property is the least safe form of ownership. That is why I think the time has come for new collective housing conceptual models“.

The manuals have been developed as part of the “Listen, Learn, Act: Collaborative for Roma Inclusion“ project, implemented by the A 11 Initiative for Economic and Social Rights with the support of the Olof Palme International Centre.