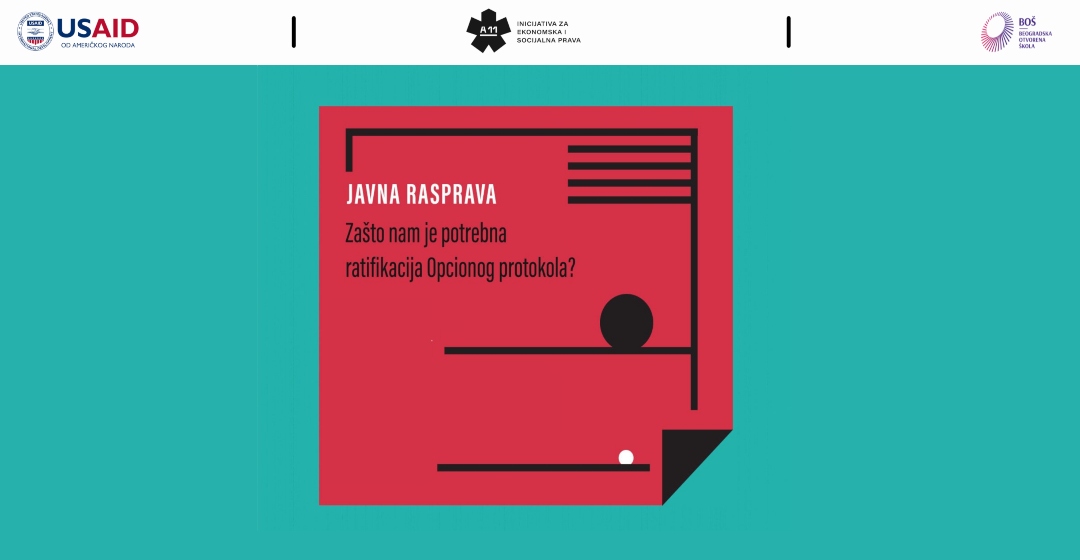 Posted at 10:05h in News by a11initiative 0 Comments
Share

On October 20, 2021, Initiative A 11, with the support of the United States Agency for International Development (USAID) and the Belgrade Open School (BOŠ), opened a public debate on barriers to enjoying economic and social rights in Serbia, as well as opportunities and the benefits of signing and ratifying the Optional Protocol to the International Covenant on Economic, Social and Cultural Rights.

Initiative A 11 started this process of public conversations with the aim of involving various actors – CSOs, trade unions, human rights experts and decision makers who would be crucial when it comes to the topic of the ratification of the Optional Protocol in Serbia.

The program coordinator of the A 11 Initiative, Danilo Ćurčić, emphasized that the practice of organization and its field work show the need for access to the international mechanism for protection of economic and social rights and that the Optional Protocol would be a guide for administrative and judicial bodies in the process of protection and promotion of these rights. He also presented a new analysis of Initiative A 11, Justiciability of economic and social rights in Serbia, which aims to point out the basic issues related to the growing number of citizens who complain about violations of economic and social rights, the status and justiciability of these rights in Serbia, with the special focus to the right to social protection, health care, the right to work and housing.

The Minister of Human and Minority Rights and Social Dialogue, Gordana Čomić, emphasized that this ministry is open for conversation on the ratification of the Optional Protocol, and that any instrument that opens space for better and more thorough dealing with human rights is good, but that conversation must include both the judiciary and the National Assembly. The Minister stated that there is no clear explanation as to why the recommendations of treaty bodies and mechanisms for the protection of human rights are not fully implemented and that the Ministry is considering starting a dialogue on key human rights issues in Serbia, but also that the ministry team is making an assessment on whether Serbia needs a human rights strategy. Finally, the Minister stated that she does not see an obstacle to the presentation of Optional Protocol in the Assembly in the next six months, if all relevant actors would be included in the discussion.

Prof. Dr. Nevena Vučković Šahović, a former member of the Committee on the Rights of the Child, stressed that it is necessary to encourage the process of ratification of the Optional Protocol, but also to remember how long the process of adopting some other agreements took. She emphasized that in the process of ratification the essence lies in access to justice, and that without access to justice, there is no realization of rights. She also believes that it is not logical to ratify the basic treaty but not to ratify the Optional Protocol because that shows there is no will to fundamentally change the human rights situation or to fully implement the rights guaranteed by that treaty.

The head of the UN team for human rights in Serbia, Milan M. Marković pointed out as very important the fact that the competent ministry participates in this conversation as well. He recalls that ratification and accession to universal human rights mechanisms are regularly cited as priorities in the concluding observations and recommendations of treaty bodies and other international human rights mechanisms. He also mentioned that the crisis caused by the corona virus shows how indivisible human rights are, and how important it is to end the global phenomenon of unequal treatment of economic and social rights. Marković also pointed out that joining the Optional Protocol would have a preventive effect and help in a better understanding of obligations and rights, and that it would be a valuable experience that the state could go through.

Dragana Savić from the Ministry of Labor, Employment, Veterans and Social Affairs drew parallels between the rights guaranteed by the conventions of the International Labor Organization and the rights from the International Covenant on Economic, Social and Cultural Rights and stressed that the monitoring system of these conventions is similar to the one Protocol prescribes. In addition, she stated that the Ministry has started considering accession to the additional protocol to the revised European Social Charter, and that when conducting an analysis of the domestic legislative framework for these purposes, it would be possible to conduct the same type of analysis for the Optional Protocol.

Tatjana Prljić, Head of the Department for Cooperation and European Integration at the Commissioner for the Protection of Equality, emphasized that discrimination in the field of work and employment is the most common topic of complaints filed to the Commissioner’s institution. She believes that it would be useful to consider all the benefits of ratification of the Optional Protocol and how it could affect the improvement of the protection of economic and social rights in Serbia.

During the discussion, the Secretary of the Federation of Independent Trade Unions of Vojvodina, Tomislav Stajić, pointed out the support that this union provides to the ratification of the Optional Protocol and the improvement of the system of protection of workers’ and other rights guaranteed by this international agreement.

The public debate on the need to sign and ratify the Optional Protocol is open until October 30, by which time the views and suggestions of the professional public, organizations, unions and other actors will be collected and after that, sent to the competent ministries. You can express your views and suggestions by filling out and sending the form (that can be downloaded here)  to office@a11initiative.org.