Tradeswomen – forgotten on the frontline against corona 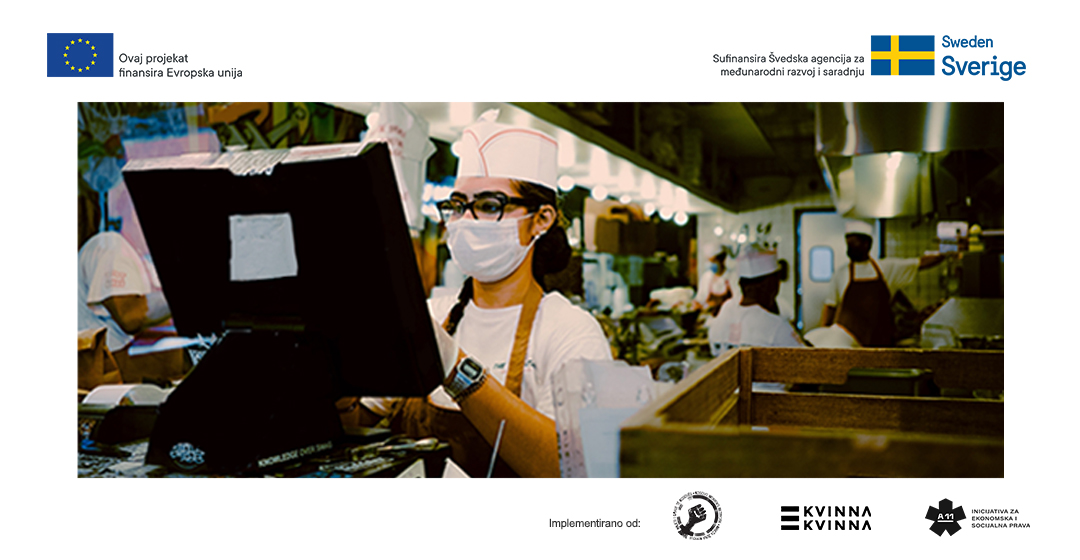 Posted at 12:40h in News by a11initiative 0 Comments
Share

The labour rights of tradeswomen being among the most vulnerable since the beginning of the pandemic because of the constant exposure to the possibility of infection due to the nature of their job, have been further regressed over the last year. Lack of protection measures against infection in the workplace, denial of the right to fair and favourable working conditions at the time of contagious disease, disrespect of working hours, denial of the right to sick leave, are just some of the examples of violations of rights the tradeswomen referred to in the research and analysis “The Position of Tradeswomen During the Pandemic of COVID-19”, presented by The A 11 – Initiative for Economic and Social Rights.

Tradeswomen are not, in essence, motivated to seek protection of their labour rights from the competent institutions or to use legal opportunities to do so. Specifically, The A 11 Initiative, in parallel with the research on the position of women workers, also investigated how many procedures had been initiated upon the reports of discrimination in the workplace. The A 11 Initiative sent requests for submission of information of public importance to the addresses of the Labour Inspectorate in 25 districts in Serbia, wanting to know the number of submitted applications and initiated ones, i.e. completed procedures. It turned out that only in Cacak, Novi Sad, Vranje and Zrenjanin there were reports of discrimination in workplace. No responses were received from the Labour Inspectorate in Prokuplje, Smederevo, Sabac, Uzice and Kosovska Mitrovica, and in all other cities to which requests were sent (16) there were no reports against employers based on discrimination in the workplace.

“Tradeswomen are aware that certain rights of theirs have been violated, but the fear of losing their jobs prevails and they will, therefore, suffer all the conditions and will not use the opportunities that the law gives them to protect those rights,” said Milica Marinkovic from The A 11 Initiative on the panel on improving institutional practices in preventing discrimination against women in the labour market, when these analyses were presented.

The same impression was conveyed by Marija Martinic from UBU “Nezavisnost” who said that according to their experiences both men and women workers do not trust the state institutions, neither the union nor the civil sector, and that the fear of losing their job is greater than desire to change and protect their labour rights. “The pandemic was just an “amplifier” of problems in the labour market, our problems are the same, only now during the corona, they are a little more visible”, she said.

The analysis of the position of tradeswomen during the coronavirus pandemic included issues such as: the right to fair and favourable working conditions and a safe and healthy working environment, reimbursement of transportation costs or organization of transport during the state of emergency, organization of working hours and wages and compensations.

The right to a safe and healthy working environment, during this period, implied the application of adequate protection measures against infection for all trade workers due to the special regime of work and constant exposure to numerous contacts. Most of the respondents confirmed that their employers had provided them with masks and gloves, except at the beginning of the state of emergency, when they mostly had managed on their own. The biggest problem for them is communication with customers who do not wear masks, and they are obliged to warn them to use this means of protection. They are also obliged to take care about the number of customers who are currently in the store, as well as to disinfect and clean the space.

“Of course, not all buyers wear masks. And it is our responsibility to warn them, but we cannot force them. What should I do when a 2-meter-tall and over 100-kilogram giant enters, whom I know as violent, and says – I have to go shopping right now … And he laughs in my face … And if the inspection arrives, and finds him in the store, I don’t know who will be blamed? Will it be me because I can’t get him out? I have half a meter and fifty kilos less than him. ”

When it comes to wages and payment of overtime work, it should be borne in mind, The A 11 Initiative says, that this is one of the professions with the lowest wages. All respondents have a minimum wage plus one dinar, and only one, who is the manager of one store in Sabac, receives additional 4,000.00 dinars because of that position. Generally, they do not take sick leave in regular circumstances, which is mostly the consequence of the fact that women have blank signed employment contracts and, as they say, “they are easily replaceable”, so they do not want to take risks.

“I don’t even know what my wage base is … I don’t know how much my working hour actually costs. Especially because my working time last longer … It can happen that you get a 20 percent increase one month, and that it is less than it was last month without an increase.”

Tradeswomen worked full time because grocery stores were always open in all phases of anti-epidemic measures. Women who had to take care of other family members or children who did not go to schools or kindergartens, were additionally endangered here as well. Although the official working hours of tradeswomen are seven or eight hours, they usually work longer, often ten hours a day.

“Tomorrow is Sunday, my working hours and the working hours of the store are from seven a.m. to five p.m. By the way, I work alone, without a colleague. Next week, my colleague will work the same working hours (ten) so that I can be free.”

For the purpose of the research, the researchers of The A 11 Initiative talked to 15 tradeswomen from stores in Belgrade and Sabac, aged from 23 to 56. The research is part of the project “Improving Institutional Practices in Preventing Discrimination against Women in the Labour Market in Serbia”, supported by Kvinna till Kvinna and the Kosovo Women’s Network, funded by the European Union and co-financed by Swedish International Development Cooperation (SIDA).

Give unions the right to file complaints on behalf of workers

It is expected that the amendments to the Law on Prohibition of Discrimination, which is being adopted, will give a greater role to the Labour Inspectorate and other inspections and enable these bodies better communication with the Commissioner for the Protection of Equality in order to protect workers. It would also be good for these amendments to allow unions to file complaints with the Commissioner on behalf of persons who have suffered discrimination, although the current decisions indicate that this right will be denied to unions.